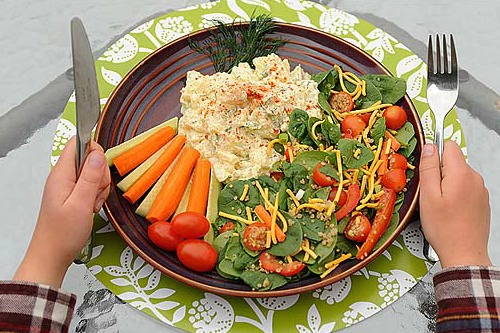 – 17 May, 2013By Andrew Fleming, Vancouver Courier
Vancouver is set to become the first city in Canada to officially put the idea of giving up meat for a day on the table. Mayor Gregor Robertson will be proclaiming June 10 to be “Meatless Monday” in honour of a growing global campaign that encourages carnivores to take a break from consuming animal products one day a week for environmental and health reasons.

According to proponents of the Meatless Monday movement, which include high-profile believers such as Oprah Winfrey, David Suzuki, Al Gore and James Cameron, a single person giving up meat for a day can save an estimated 160 thousands litres of water and more than 320 kilograms of carbon emissions each year. Dozens of cities, school boards and private organizations around the world have introduced meat-free days in recent years, and Trish Kelly, co-chair of the Vancouver Food Policy Council, said she hopes it will catch on in the city even though the mayoral proclamation won’t come with actual concrete policy changes.

“Some of the other municipalities in North America have adopted it in different ways but we thought asking for one would be a good symbolic gesture but also give local organizations a chance to hang events on this celebration,” she told the Courier. “There is a very strong, progressive agenda already around food so this was a way to ask for some support from the mayor without it becoming another actionable item when they already have so many good initiatives that they need to move forward on.”

The concept was first cooked up during the First World War, when the U.S. Food Administration told citizens that “Food Will Win the War” and introduced both Meatless Mondays and Wheatless Wednesdays. The nonprofit group Healthy Monday resurrected the idea in 2003 in association with the Johns Hopkins Bloomberg School of Public Health.

“I’ve been working on this issue for 10 years and I used to get yelled at in public meetings and things because I must be some kind of ‘ideological something or other’ but people are finally getting the message now that we can be discerning about our consumption,” said Boyle, a Vancouver-based researcher with a PhD in neuroscience and a masters degree in food policy. “We’re not telling people not to eat meat, we’re just saying think about scaling back a little.”

Boyle points to a range of issues surrounding the commercial meat business ranging from deforestation to poor waste management and the impact of consuming antibiotics and growth hormones given to livestock.

Kelly has set up a Facebook page for likeminded groups and individuals to share suggestions and events leading up to June 10 and said she hopes organizations like the Vancouver School Board and senior centres might get involved.

“I’m hoping this is something that will be picked up virally,” said Kelly. “This could possibly even be an impetus for starting discussions around some sort of curriculum for teaching Meatless Mondays in schools.”